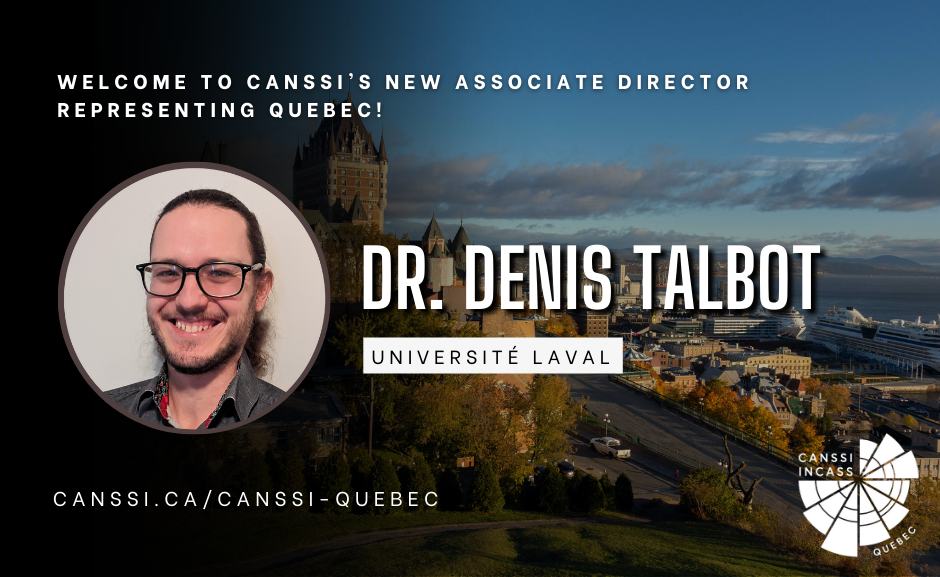 Denis Talbot, a Full Professor of Biostatistics in the Department of Social and Preventive Medicine at Université Laval, was confirmed at the October 2022 meeting of CANSSI’s Board of Directors. He will serve a three-year term as a member of CANSSI’s directorate.

During the application process, Denis expressed “great enthusiasm” for the assignment and cited “the experience, the expertise and the connections” he brings with him.

He also revealed a special motivation for seeking the position.

“I am particularly interested in getting more involved in CANSSI because equity, diversity, inclusion, and accessibility are part of its core values. This deeply resonates with my personal values.

“I strongly believe in the importance of providing the tools and opportunities necessary for each individual to develop to their full potential, to treat each of them with respect and openness, to create spaces where people can feel safe to be themselves and to celebrate diversity. I sincerely hope to have the opportunity to work with CANSSI to advance these goals among the Canadian statistical community.”

Denis has contributed to the statistical community in a variety of ways since being hired by Laval in 2013.

He participated in the creation of the graduate programs in biostatistics at Laval and recently completed a two-year term as director of those programs.

In 2021 he was elected to a two-year term as a regional representative for Quebec at the Statistical Society of Canada (SSC), and he is also a member of the bilingualism committee and the membership committee of the SSC.

In his application, Denis highlighted the close connections that his academic trajectory has led him to build with colleagues from institutions across Quebec.

For example, he completed his undergraduate and master’s degrees in the Department of Mathematics and Statistics at Laval, earned his PhD at Université du Québec à Montréal (UQAM), and has taken courses at Concordia and McGill. In 2020 he spent a sabbatical at McGill and used the occasion to develop and strengthen his collaborations with colleagues from McGill, UQAM and Université de Montréal.

“These connections will facilitate my role of bringing to the attention of CANSSI the opinions and concerns from the people of Quebec,” he noted.

Denis’s research interests concern causal inference methods for the analysis of observational data. He is also doing collaborative work in various areas including psychosocial stressors at work, vaccine effectiveness, cardiovascular health, and cancer. His program of research has been supported by grants from NSERC, CIHR, and by research-career awards from the Fonds de recherche du Québec – Santé.

Associate Directors are part of CANSSI’s primary management and administrative group, together with the Director, Deputy Director, and Regional Directors. They provide feedback on all aspects of CANSSI operations, help steer CANSSI developments, and adjudicate the smaller budget programs as well as the CANSSI Distinguished Postdoctoral Fellowships program.

CANSSI Knowledge-Sharing Round Tables: A Chance to Talk